Heidi Ayarbe is the author of three young adult novels: Freeze Frame, Compromised, and Compulsion. I can say with authority that Compromised and Compulsion are both awesome, and Freeze Frame is on my To Read list. Compulsion just came out on Tuesday, and it’s freaking great, and at the end of this interview you can comment for a chance to win an advance reader’s copy of Compulsion.

HA: Compulsion happens over a period of five days in the life of Jake Martin. Jake’s the star of the soccer team, ready to lead his high school team to their third state championship in a row this Saturday. This Saturday means everything because this Saturday, if he plays perfect, he will be released him from the spiders – the numbers – and the other obsessions that rule his life. Saturday, the primes converge and Jake believes that if he does everything right, Saturday will be the day Jake gets to be normal. He’s tired of hiding, tired of living with OCD.

BH: What compelled you (haha) to write Compulsion?

HA: I had a few panic attacks a few years ago. I don’t know why – out of the blue – I became literally panicked over small spaces and 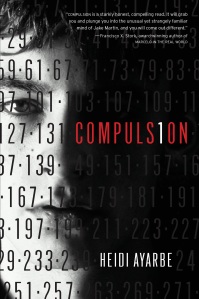 being closed in. I figured out how to keep from panicking in elevators and on airplanes, buses and closed-in spaces – some tricks to keep me okay. Each attack lasted just a few minutes but felt like an eternity. I got to thinking about people who live with anxiety – the real deal – every day and how that feeling never goes away. I wanted to write that story because I’m aware that over 40 million people are diagnosed with some kind of anxiety disorder … But I can bet that so many of those 40 million feel pretty alone. I hope Compulsion, somehow, can reach out to those who suffer – give them a voice.

BH: I read Compromised, loved it, and reviewed it awhile back. (HA: Thank you!) How was your experience different when writing the two different books? How was it the same?

HA: Every book is so different. But, I think, there’s nothing as daunting and terrifying as a second novel. (Compromised was my second novel). Once I wrote Freeze Frame, my first novel, revised it, and gone through the grueling process from getting an agent through to copy edits, it felt so … done. And then I was given the chance to write a second novel, Compromised, and everything changed. There were expectations and deadlines – different ones – and reviews to compare to FF reviews. And THE DREADED FIRST DRAFT. I’d totally forgotten how abysmal my first drafts ARE (and continue to be). So seeing Compromised through the published-eye lens was ghastly! All I saw was drivel, having forgotten that I’d get a chance to make it work. I didn’t really enjoy the process as much because I was horrified. So Compulsion was pure joy. I knew I could do it. I made it through novel #2 (which I happen to love, but it was really tough) and Compulsion’s first draft, as expected, was a mess, but I got the structure down and a chance to make it into a novel I love. So, BIG difference in perspective. Same process.

HA: I think it’s the same tip for writing anything: OBSERVATION. Take the time to watch how people act in public, at restaurants. Watch out for clichés! Writing is about creating believable characters. So watch how males talk compared to females. Listen to them. Think of a male reacting to something and how would a female react to it (typically), then switch it up and give the male the “cliché” female reaction but make it a real guy thing. It’s mostly about creating wonderful, believable people and making them people we can relate to.

HA: Cramped, overflowing with papers, books, receipts from milk I purchased years ago and other useless things … MESSY!

HA: I LOVE Anne Lamott’s Bird by Bird. It makes me feel reassured that I’m not alone in my neurosis and insecurities and fear of failure and more. What I LOVE most is how she says, SPILL IT OUT ON THE PAGE, EVERY PAGE, EVERY NOVEL. I love that advice.  See below!

BH: What is the best writing advice anyone has given you?

HA: See above … though technically she didn’t give it to me personally. But GREAT advice.

BH: Thank you for the interview, Heidi, and thanks for the great reads!

And didn’t I say something about a contest? A big thank you to Heidi for making it possible. So, the rules are simple. The giveaway is limited to the continental United States (sorry, overseas people…unless you have an address here you’d like the book shipped to!). To enter, leave a comment at the end of this post. (Email address required to comment, but your email address isn’t published or shared with anyone, ever!)

If you tweet about the contest & share this link, you can get an extra entry (limit one extra). Just comment with the link to your tweet so I can verify that everything’s on the up & up.

For more on Heidi and her books, check out the sites below:

Set-up: Everything Maya holds dear – her house, her belongings, her designer clothes, and her con-artist dad – are taken away when her dad’s crimes finally catch up with him. Maya is sent to Kids Place, an institution where children and teens wait for foster parents to take them in.

Main character’s goals: This is pretty straightforward. Find long-lost aunt. While this is a great goal in and of itself, the stakes are raised when a creep-nasty couple of foster parents plan to take Maya in. The couple is outwardly religious, but the man seems to only worship one thing: teenage girls. If that isn’t shudder-inducing enough, add the complex power struggles among the other children and teens in Kids Place.

My reaction: You know I hate stories that make me cry, and this one did. Grr. But it also had a very satisfying ending, and not in a sunshiny, “girl gets boy and lives happily ever after” sort of way. I mean, I love Disney fairy tale endings, I really do. But this felt real, and plausible, and even better.

Of interest to writers: Maya’s got a scientific and, actually, a very paranoid way of looking at the world. For every decision she makes, she creates a scientific-procedure to go with it. Here’s an example:

Hypothesis: If I can find Aunt Sarah, I can avoid being sent to the Holy Rollers’ house.

These scientific procedures serve to underline Maya’s voice. They also reinforce her character as a scientific, logical smartypants. And – even better – they clue the reader in to her ever-plummeting situation (as if the various crises in the story are not enough…trust me, they are).

Bottom line: This is a well-crafted novel, with believable characters who will win you over and quite possibly break your heart.