So. I have long held the belief that I have no value in the kitchen whatsoever, except perhaps as a dishwasher. Not only do I subscribe to this belief, but I gladly admit it to others.

Despite this belief, nay, this truth, that this woman’s place is definitely NOT in the kitchen, I continue to adventure into its depths in the hopes of concocting something worthy and edible that is NOT chocolate chip cookies.*

I fear the oven.

And no matter what I’m making, on those rare occasions I am able to swallow my fear (and overcome my crippling laziness) something bad always happens.

Sometimes my misadventures are as minor as filling the kitchen with death-smoke resulting from drops of a leaky cheesecake (my one-time contribution to Thanksgiving dinner…which was in actuality contributed on the day following, as I’d forgotten the cake needed to hang out in the refrigerator overnight).

After. Note: this is after repeated washings.

Husband will never again ask me to get rice started for him.

I once had to throw away an entire double batch of pumpkin bread, misreading the “teaspoon” as “tablespoon” for both salt and baking powder. In my defense, the recipe was handwritten by someone else.

I’m thrown by recipes that refer to “bouquet garnis” and “cheese cloth,” and do not even ask me to fry something because if egads that grease splatters onto my bare skin I think I am dying. I put on more protective gear for cooking than I do for cleaning toilets, or visiting nuclear power plants.***

This has been great fun creating childish drawings for you, but I’ve got something in the crock pot and I think I smell smoke.

Here’s Kitchen Capades I, if you’re interested. No drawings, but maybe that’s better.

*Chocolate chip cookies are a relatively safe assignment for my (un)skill level. I have been baking them with my mother since before I can remember, and worked out the hazardous kinks with BDawg, my BFF since 3rd grade. Our hazards were 1) neglecting to remove foil wrapper from margarine before microwaving, and 2) attempting to make cookie-sheet sized cookies, one for each of us, and ending up with twin liquid dough puddles. Fairly harmless, as hazards go.

**I made myself blue. Creative license. I like purple better, but the purple in Paint is kind of garish. And this blue is…not? Well, it’s less garish.

***No, I have not actually visited a nuclear power plant. Creative license.

I am supposed to be working on my novel right now, so today’s Momming Around entry is a couple photos of our new counters and sink:

Eyes, look your last. The uncluttered-scheme will probably only last as long as my energy. Oh, I may as well be honest. I had to move a whole bunch of clutter around just to take these photos. Behind you on the other counter are all the things that used to be on this counter. And as soon as I took the photo I moved most of them right back.

This week, my mother-in-law is visiting, and while some people don’t get along with their mother-in-laws, I am not one of those people. She’s the best. And she’s giving me writing time in the mornings, which is also the best.

I don’t think kids are meant to be raised with just one adult in the house. Few people in our society, or even world, can afford to have one parent stay at home, and fewer could have both parents stay at home. And lots of us don’t live in the same places as our parents or other family members.

One mom, alone with her kid or kids, all day? It’s tough. I’m not complaining (okay, maybe a little bit). There are so many moms out there who would love to stay at home full-time. I’m one of them. But it is hard. What I am really doing right now: rejoicing in having another adult around while Husband is at work, so it’s not constant Z time. Yesterday, the time I played with her I could be totally focused on her, because I’d had some nourishing time to myself. I appreciated her so much more.

Next week, my mother-in-law won’t be visiting. Sad. But she’ll come back again, and I’ll enjoy the time that she’s here. And meanwhile…

I can use my super-duper handy-spandy built-in soap dispenser! 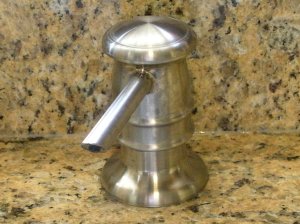 2. learning that my mother is bffs with an editor at a big-time publishing company (I can’t speak from experience here, but I know this would cheer me up)

4. Sarah Dessen’s novels This Lullaby and The Truth About Forever

5. Pride and Prejudice on film (the BBC version…but when do I have 5 spare hours?) OR, you know, the book is okay, too

6. movie Blue Crush (I love sporty girl movies–the inspiration comes in handy for after I indulge in #1 above)

9. a walk (again necessary to counteract negative effects of #1)

14. gardening (unless there are slugs)

15. circling everything I want in the IKEA catalog

19. emails from the library telling me a book I’ve been waiting for has arrived

There are so, so many more, but rather than list them all, I think I’ll head out and enjoy some of them.

This morning I was greeted in the kitchen by the Mt. Everest of dishes, looming precipitously above me and sucking up all the oxygen with their stench. Didn’t I JUST do these? I wondered. Hasn’t there been enough kitchen cleaning for one week? Does it never end? I know I’m not the first stay-at-homie to ponder these philosophical quandaries. With my easy solution, perhaps I’ll be the last.

For those of you interested in my ground-breaking solution, here it is: stop eating. No food means no dishes. I know I can certainly survive until the Fourth of July off of my stomach fat alone, not even needing to use up the fat stores from other parts until much later. Z can survive off the handouts she gets at playdates. Seriously, the kid walks into a stranger’s house and starts begging. I try to convince the other moms that she does eat at home, but they don’t believe me. So I may as well stop feeding her and make the rounds to the other toddlers’ houses. And Husband? He barely eats anyway, somehow getting through an entire day on three cookies. In fact, he doesn’t even have to eat those cookies. He takes them to work, then brings them home; he magically absorbs whatever calories he needs just from carrying them. I magically absorb whatever calories I don’t need just by looking at air.

But this isn’t an article intended to poke fun at my weight, as easy as that is right now. I’m mystified by the kitchen, and the dishes inside it, and how they seem to dirty themselves through the very virtue of being dishes. Perhaps I don’t get it because I don’t cook. So when I see the dishes it’s magical in an Oh-No-Voldemort-Just-Apparated-In-My-Kitchen sort of way.

When I do finally tackle the mess, usually in the morning (I mean really, who wants to waste Z’s precious bedtime hours cleaning?), I vow to never again let it get this bad. “Never,” I say, scrubbing a chunk of enchilada off the rim of a plate. All good intentions are lost as soon as Z looks “thoughtful” and needs a new diaper. My child protects me from doing too much work because after the diaper change she wants a story. And in the face of all those dishes, reading Rosemary Wells’s Bunny Planet trilogy forty-six times sounds like nirvana.