You know it’s bad when you’re dreaming about revisions. Here’s the dream I had the other night, in comic format – although there was nothing comic about it. Har har.

Nothing comic about that, either.

Yeah, kind of a bummer.

The good news is that my agent didn’t hate my revisions. No, she wasn’t thrilled with the new ending, but that’s fixable. Hardly throwing the whole thing in the garbage. 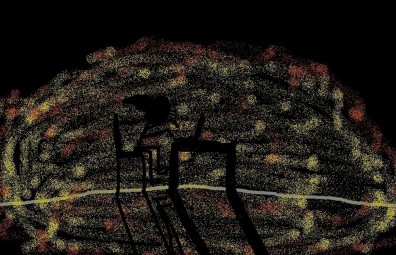 On those days I felt pretty good, type-type-typing away. (Actually, for all this, substitute “days” for “nights” because I’m momming it during the day and revising at night, often taking breaks to flip over my little stomach-sleeper.) I tackled new ideas, brainstormed, spent a lot of time doing the Scrivener tutorial (LOVE Scrivener), and generally felt like a winner.

But there were a couple of days that looked like this:

I think the drawing says enough.

*Plato did not endorse this blog post. He wants absolutely nothing to do with it. He scoffs at my amateur drawings.

*is a lonely place, but not entirely lonely

*more than one writer friend is ALWAYS in a neighboring cave

*thank heavens for good friends who respond to emails within minutes

When I came out of the Revision Cave I looked like this:

So then I painted my toenails a happy teal color, the color I would’ve been proud to wear on a baggy t-shirt in 1986. I would post a photo because honestly my feet are my only body parts that don’t disgust me these days and aren’t covered in a fine, barely-wiped-away layer of baby spit-up. Although he did get my slipper the other day.

My computer is going to Tune-Up Land this weekend, and I’m not sure when she’ll be back, so I’ll use this as an opportunity to do another Internet Blackout / Reprioritizing of Internet Usage over the coming week. Same deal as last time: check email Monday, Wednesday, and Friday, with a 30-minute limit on those days. (No worries, I won’t be completely without internet access. Homes has a bright shiny new laptop I can use. If I arm-wrestle him for it. Nope, that won’t work. He’s definitely stronger than I am. Which isn’t saying a lot, as the heaviest thing I’ve lifted in the past thirteen weeks is Maverick, and he’s only about twelve pounds. I think I’ll stop now.)

Last thing – Attention Blogger Friends: If you use images on your blogs that you find online, you may want to check out this post on Pub Rants. I’m currently going through & removing everything I didn’t create myself.

Kimberly heard someone behind her. She turned around quickly, just in time to see the sorceress pointing her wand at James and chanting in a foreign language.1 Kimberly had no time to think. “Noooooo!” she wailed, then took up a handful of dirt from the hard-packed earth,2 hurling it at the twisted face of the sorceress.

By an invisible and powerfully strong force, Kimberly was pushed to the ground. There she lay, unconscious and still.

Kimberly awoke, startled to see James’1 handsome face directly above her own. A cold wash cloth was being pressed against her forehead.2 “Kimberly, are you all right?” James asked tenderly,3 brushing her hair away from her face.4

“James, I – I didn’t think you could come,” she said dramatically.1 “I knew you were mad; I thought I was doomed.”

“I would never leave you to die. I’ll never be that angry.”

“You distracted the witch for me, then I had the chance to kill the monster, then I fought the witch and killed her too. But when you threw the sand in her eyes, she aimed her wand at you instead. That’s why you got hurt.”2

“Thanks, James, for saving me.” Kimberly reached forward and kissed him gratefully on the cheek.

“No, Kimberly, I couldn’t have done it without you.”3

James cradled Kimberly in his arms for a moment, then picked her up and carried her away from the woods and the evil memories that remained there. They would make up. They always did.4

And thus ends our journey into this endearingly short romance. (Indeed, its brevity may be the only thing in its favor.)

Yes, I will beat a dead horse. For the first installment of this scintillating poetastic series, click here.

She could smell it’s1 breath, the crude stench lingering as the monster went back to the hole it slept in. It lied2 down and began snoring once more. What the heck is going on? Kimberly wondered. But she didn’t mind. The longer the monster slept, the more time James would have to realize what a moron he was and would come looking for her.3

Frantically, Kimberly looked around, taking in her surroundings as she did so.1 What if James was too angry this time, and didn’t come back for her? He knew she couldn’t find her way around in the woods, but right now he was probably too angry to care.2

Kimberly decided that she couldn’t always depend on James.1 Sure, he had gotten her out of many tough situations,2 but right now he was being senseless. Kimberly looked around for a weapon. Naturally, there weren’t any nearby. After all, sorcerers aren’t widely known for their moronic stupidity.3

Then, all of a sudden, Kimberly heard the sorceress shouting angrily at something or someone out in front of the house. Could it be? Yes it was! It was James!1 “James!” Kimberly cried out desperately.2 “James! James! Back here!”

As if in a nightmare,1 the monster awoke. It looked around hungrily, then it’s evil gray eyes rested on Kimberly. Terrified, Kimberly was quiet. She no longer heard anything but silence.2 Had the sorceress gotten James, too? But then the monster lifted up its snout, sniffing the air. James bounded out of nowhere,3 tackling the vicious monster.4 The monster wailed in surprise, then began bucking and jumping, trying to throw James off its back.5

And thus ends the second installment of “The Monster.” Next week, we’ll finish the story.

After that, I have a vampire story I wrote in high school. I think it’s even more embarrassing than this one.

And…a writing update. Um, about my writing, people. Because one six-hundred-billionth of this is about me. (It’s a bumper sticker.)

First: House Red (a.k.a. the Vampuscript) is done. Finished. Shelved. To Be Forgotten. There are some cool scenes that I may resurrect later, but HR functioned as some solid training wheels and I’m ready to move on.

Second: Savage Autumn has undergone major surgery, to use a metaphor that is quickly becoming a cliche. The first five chapters have been amputated and now I’m in the process of constructing a prosthetic. Some bones and skin grafts of the amputated limb are still part of it, but showing up in funny places. Like a toe sticking out of the knee.

An agent is waiting for the first three chapters, and believe me, I want to send them so bad. But this is one of my dream agents, and I don’t want to mess up my chances by sending something that is less than stellar.

Third, which is not related to my own writing at all (I used up my one-six-hundred-billionth space): And if you’d like a little humor today, a friend of mine pointed out a funny writer who reviews romance novels on her blog. I’ve only read the D+ reviews, since the first one I read had me in stitches. I am not nearly gutsy or, I’ve gotta say it, mean enough to post such scathing reviews on my own blog (except with hmm hmmm hmmm, which just, you know…deserved it).

And I’m off to the library so I can read a book and write my own (much nicer, I hope) review for Monday.