And…a writing update. Um, about my writing, people. Because one six-hundred-billionth of this is about me. (It’s a bumper sticker.)

First: House Red (a.k.a. the Vampuscript) is done. Finished. Shelved. To Be Forgotten. There are some cool scenes that I may resurrect later, but HR functioned as some solid training wheels and I’m ready to move on.

Second: Savage Autumn has undergone major surgery, to use a metaphor that is quickly becoming a cliche. The first five chapters have been amputated and now I’m in the process of constructing a prosthetic. Some bones and skin grafts of the amputated limb are still part of it, but showing up in funny places. Like a toe sticking out of the knee. 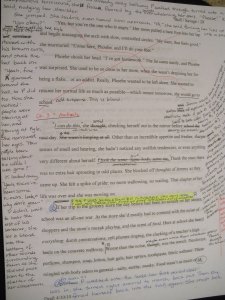 An agent is waiting for the first three chapters, and believe me, I want to send them so bad. But this is one of my dream agents, and I don’t want to mess up my chances by sending something that is less than stellar.

Third, which is not related to my own writing at all (I used up my one-six-hundred-billionth space): And if you’d like a little humor today, a friend of mine pointed out a funny writer who reviews romance novels on her blog. I’ve only read the D+ reviews, since the first one I read had me in stitches. I am not nearly gutsy or, I’ve gotta say it, mean enough to post such scathing reviews on my own blog (except with hmm hmmm hmmm, which just, you know…deserved it).

And I’m off to the library so I can read a book and write my own (much nicer, I hope) review for Monday.