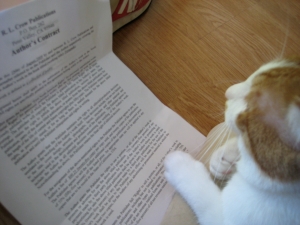 Kato Peruses an Author Contract (Oh if only my Clarkie could do the same!)

For my second-ever Not-Famous-Yet Author Interview, here is Josh Fernandez. He’s an amazing writer with a hilarious, irreverent voice, and he has a book of poetry coming out this fall. It seems I’ve snagged him for this interview just before his jump into fame. Okay, so publication does not equal instant fame. For instance, I, like many other people, still have no idea who wrote that weird Twilight book.

BH: What’s your one-paragraph pitch for Stickup Kid?
JF: Buy it or I’ll murder you! No, it’s an exciting little story about a small half-Mexican, half-Caucasian kid named Bear who lives with his mom in Brookline, a very Jewish suburb of Boston. One day Bear separates from his class while they’re on a field trip and he meets a man named Stoop. Bear runs away from home and finds Stoop, who takes him in and teaches the naïve boy about his Latin heritage, but he also teaches him the art of being a stickup kid—a purse-snatcher, a robber, a thief …

BH: You’re one of the few people I know who actually makes a living from his writing. What do you write to pay the bills?
JF: I write mostly arts and culture stories. I write for Spin.com, Sacramento News & Review, Boulder Weekly and some other papers that are scattered throughout our glorious country.

BH: How do you think your nonfiction writing influences your fiction, if at all?
JF: Non-fiction writing has helped me write fiction in a number of ways. It’s really helped me find a voice. My goal when writing for newspapers isn’t to be a solid journalist; my goal is to simply entertain the reader. I get a lot of hate mail. News writing has also helped me find the focus of whatever I’m writing. Nobody wants to read a long, blathering story, except for my grandpa. But he could barely read. And I think he was just pretending to read, trying to escape my grandma. RIP, gramps.

I also write poetry, which helps with everything except for money. Although, I just signed a contract with R.L. Crow press. They are going to publish my first full-length collection of poems, tentatively titled Dancing to Genocide. It should be out in the fall.

BH: What is your writing schedule like?
JF:  I’ve never really had one until I started writing Stickup Kid. I’d kind of just write when I felt like writing, which kind of ended up being all the time. But for the novel I got up every morning at 8, went to the coffee shop and wrote until 2 or 3. It was important that I did that because I have a tendency to stay in my underwear all day and watch YouTube videos of high school kids getting hit in the nuts with various objects.

BH: Voice is one of the aspects of Stickup Kid’s beginning that I admired the most. It’s also a quality all writers are after, and something which confuses many beginning writers. Do you have any tips to share on how to cultivate voice?
JF: I think basically you have to just have a voice. Sometimes I teach a writing class at Sacramento City College and I ask the students if they ever have thoughts that pass through their heads that they’d never tell anyone because they seem weird or sick. They always say “Yes.” Then I tell them to take those thoughts, write them down and then throw away everything else. And then they don’t say anything. Because they’re all asleep. Because I’m really boring. The point is, you just have to be unafraid to grab the core of who you are and put it down on a page. Nobody wants to read the outer part of you that’s been influenced by the outside world. That’s already been done. People need to read the inner you. That’s very new age. I learned that from Yanni.

BH: Your blog title “I Know, I Hate Blogs Too!” just begs me to ask what it is you hate about blogs. So, what do you hate about blogs?
JF: I don’t hate blogs. I just hate bloggers. Ha! I am a blogger, so what does that say? Really, it’s just the journalist in me that hates the idea of people who don’t get paid taking our jobs because they offer their blogging service for free. There’s so much bad journalism now because of this idea that “anyone can be a writer!” It’s the same with self-publishing. Anyone can say, “I’m a published author!” and then be a writer, while the rest of us who are actually trying to write stuff that people will read get left in the dust. Basically, I’m saying “Waaaaah!” But in more words.

BH: Since I started my own website/blog, I discovered roughly 167,738,744 other writer blogs and websites. Are you an island or do you frequent anyone else’s?
JF: Oh I read blogs all the time. I kind of just cruise around to see what other people are doing. I can’t really think of any off the top of my head, though.

BH: Can you compare Bear, the main character in Stickup Kid, to anyone you know in real life?
JF: I based a lot of Bear off my own life. And I took parts of friends from childhood and put them into his character. There are a lot of things that happened to me that also happened to Bear. All the good, heroic things were me. The horrible and twisted stuff was, um, my friends. Yeah.

JF: Pictures! We have a spare bedroom that we made into an office. It’s good to have an office without a TV. I’d never get anything done with the possibility of Judge Judy lurking nearby.

BH: What is your favorite book on the craft of writing?
JF: I really like Robert Pinsky’s The Sounds of Poetry. It allows you look at words in an entirely new perspective. The first time I read the book it made me a little insane. I had no idea words were that delicate.

BH: Last we spoke about it, you were revising Stickup Kid with an agent’s guidance. Where are you in the process? Have you signed a contract with that agent?
JF: I’m editing it right now. When I’m done I’ll hand it over. They want the cleanest copy I can make. After that, if they like it, which hopefully they will, actually, I don’t know what happens after that.

BH: How did you & the agent originally connect?
JF: Luck! I set up my website and one of their interns happened to click on it. He read the part that mentioned I was writing a book and he told me to send the first 20 pages. So I did.

BH: What is the best writing advice anyone has given you?
JF: It was something about a bow. It was like: make your paragraph like a bow, tight enough so that when you pluck it it will resonate with the perfect pitch. Crap, no, that wasn’t it. I get a lot of great writing advice, but then I forget everything. My mind is small.

BH: Do you “tweet”?
JF: Yes. I was totally against it, but then I realized that it was another way to get my stories out there so I’m getting used to twitter.

BH: Why do you want to be published?
JF: That’s a great question. It’s all a blur now. I’ve been mulling the story of Stickup Kid in my mind for so long that I just wanted to get it out. I really like the story and I honestly think that other people will like it. I like to write stuff that I like to read. I kind of want to see if other people like the same stuff that I do.

BH: Any words on advice to other writers for keeping the hope alive?
JF: Writing isn’t a very hopeful profession. I think it’s a great hobby, but there’s a lot of heartache and rejection in the world of writing. I am the kind of person who expects to be rejected, so when I’m not I feel like I’ve tricked someone. It’s great. Not all people are like that, though. A lot of people expect to be published and expect people to gush over their writing. And when they don’t get published they blame everyone else. It can’t be like that. You have to pay a ton of dues, and when you’re done paying dues, you have to stand there while people dangle pink slips in front of your face that say “We’re sorry, Mr. Fernandez, but we regret to inform you that your story isn’t what we were looking for …”.  Man, that was like the least hopeful thing I’ve ever said. Sorry. I’ll just say: Keep the hope alive!

There you have it, folks! Words from very-nearly-famous author Josh Fernandez. When he’s famous he’s promised to get us all book deals with his amazing influence. Not really. I’m promising that for him.

Thanks again, Josh, for the interview!

You can check out Josh’s website by clicking here.