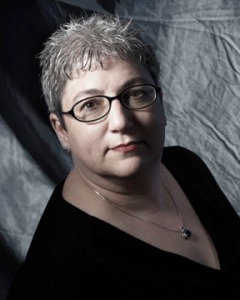 We’re taking a break from contemporary mysteries and moving back in time…far back in time. Try…the Middle Ages. Meet Jeri Westerson, author of the Crispin Guest medieval mystery series. In addition to writing great books, she’s not afraid to don a helmet and wield a sword (see photo below!).

BH: What’s your one-paragraph pitch for the latest novel in your Crispin Guest series?

JW:  In THE DEMON’S PARCHMENT, Jacob of Provencal is a Jewish physician at the king’s court, even though all Jews were expelled from England nearly a century before. Jacob wants Crispin to find stolen parchments that might be behind the recent gruesome murders of young boys, parchments that someone might have used to summon a demon which now stalks the streets and alleys of London. 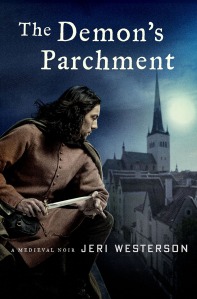 BH: The Demon’s Parchment, due out October 12, is the third book in this series. When you wrote the first novel, did you plan to create a series mystery?

JW: Yes, it was always designed that way. I had never written a series before so when I completed the first one I just jumped right into the next book, first to see if I could write a series and second because I really liked my character.

BH: What are some of the joys of writing a series character?

JW: Writing series fiction is wonderful because you can really have a chance to explore your character fully, and in my case, to see him age. His story arc can go on a long time. At least for as long as the publisher wants to publish the books. I hope that will be a long time because I have quite an extensive timeline for Crispin. I think that it’s a good idea to have some idea how the series will conclude and then all the background story arcs can lead inevitably to that conclusion. I really don’t know of any series that should go on forever. The stories can get too trite, too clichéd. Best to conclude them in a timely fashion. That being said, I’ve got some thirteen more novels in mind before I’m done with Crispin.

BH: Crispin Guest sounds intriguing: flawed, enigmatic, sexy…Where did you get the idea for this character?

JW: I wanted to write a medieval detective story, not like a Brother Cadfael with an amateur sleuth, but something more along the line of a medieval Sam Spade, a tough guy who’s hired specifically to do the dirty work. I thought that this Dashiell Hammett/Raymond Chandler kind of hard-boiled detective would translate well into the Middle Ages. No one else was doing it. As far as I could tell, authors were churning out the same old medieval mysteries they always had, and that was fine, but I wanted to write something a little different, with a little more action, a little more violence, and sex! They say you should write what you can’t find out there to read. The trope of the hard-boiled detective as a loner, someone who has a chip on their shoulder, who has run-ins with the cops is a familiar one. Raymond Chandler’s Philip Marlowe was designed as a white knight with his own code of honor, and so I thought that a real knight—disgraced or otherwise—would work as well. Everything is kept true to the time period, including Crispin’s feelings about honor, faith, and other cultural necessities. (And actually, all the sex is off screen so no worries for all the fan boys and girls out there, and there are quite a few young male readers.)

BH: And who’s the hottie posing as Crispin on your website header? I have some single friends who may want to get in touch with him.

JW: Mmm. Yes, he’s got quite the following now. He’s the fellow on all the book covers. All I know is that he is a model named Wes and probably lives in Oregon. Before we changed the covers from the rather static VEIL OF LIES hardcover, my editor showed me Wes’ model sheet and I said oh yes. He’ll do. The paperback division didn’t like the hardcover VEIL cover image and so St. Martin’s went back to the drawing board to come up with something else, something different. Something like I wanted in the first place! Since my novels are very character driven, I thought it would be better and more interesting to have a figure on the cover in a moody London background and they certainly delivered. It makes it look very different from your average medieval mystery. I love my book covers now. I think they are very cinematic. Hollywood, take note!

BH: Do you plan to stick with Crispin for awhile, or do you have other project ideas (or both)?

JW: I certainly have a lot of Crispin’s story to tell, but currently I am working on a second medieval mystery series, one that’s a little more light-hearted than Crispin’s tales. If that one doesn’t work out I’ll have to think of another one. It’s a good idea to have a few series out there, something else for fans to sink their teeth into. But I fully intend to continue with the Crispin novels. Number four, called TROUBLED BONES, comes out Fall 2011.

JW: I don’t find it hard at all. In fact, in all the novels I have written (some twenty-two) I’ve only written from the female perspective three times. I don’t enjoy that. I enjoy getting into the male mindset, all that uniquely male thinking. I find that whole “band of brothers” thing fascinating. There is no female equivalent. I was a tomboy growing up and I think I’m still a bit of a tomboy. I always gravitate toward the groups of men at parties…unless they’re talking about sports. Can’t get into that at all.

BH: Do you write full-time?

JW: I have had the luxury of writing full time only since June but that won’t last. When the money runs out you might see me at your local McDonald’s behind the counter. If you think you are getting into writing novels for the money you are sadly mistaken. Even writing for a big publisher does not guarantee a living wage, at least not at first. They say that it takes till the fifth book for the author to make a profit. I have to pay my own way to mystery fan conventions, book touring, and something as innocuous as getting bookmarks printed. All my advances go back into promotion. So I do a lot of traveling and a lot of public speaking. It’s all about sales. So buy, buy, buy! Fortunately for readers of all stripes, my books are available in a few formats: hardcover, paperback, and e-books. (The SERPENT IN THE THORNS paperback was released September 28.) And readers should check out my series book trailer on my website. It gives you a good idea of what the series is all about. Very moody. Talk about cinematic. And you get to hear Crispin speak!

JW:  I do my writing business in the morning, answering emails, going on Facebook, Twitter, blogging (I have two blogs; mine called www.Getting-Medieval.com. It’s like a magazine of articles on history and mystery, and Crispin’s blog at www.CrispinGuest.com. It’s his Facebook page, by the way, so look for his name, not mine.) I do a little writing and/or research in the late morning, some reading during the middle of the day, then do more writing late afternoon and into the evening. I’m also trying to write some short stories and a barrel of blog posts for my fall blog tour. 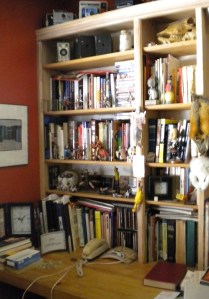 JW: I have a home office chock full of books, books, and more books. My desk is, in fact, specially built just for me (by me and my husband. We are truly Renaissance people with many hands-on skills) with a ten foot long flat surface (covered in papers and notes) with shelves above and behind me with another ten foot long surface mirroring my desk. I have a lot of research books about knighthood, everyday life in the Middle Ages, medieval words, cookbooks, commerce, religion, forensics, people, roads, maps, clothing, woodlands…you name it, I’ve got it. I also have a lot of toys, a lot of knights in battle all over the shelves; some Harry Potter stuff like a Time Turner; a couple of fox pelts hanging on the shelf; some assorted snowmen (because I collect them); a bunch of old cameras (because my photographer husband collects them); some skulls (a sheep, a goat, a cat, a rabbit, a mouse—all collected from our yard or surrounding area when it used to be more rural); a dagger I like to play with while I write; a small figurine of Death; a rubber chicken; a Shakespeare bobble head; two framed posters (one of a Klee the other a Kandinsky); a rather dashing picture of my hubby; a candy dish, empty; a figurine of a Golem; my “Box of Death” which I cart around to my speaking engagements which includes a helm and a bunch of medieval weapons; a coffee cup warmer; computers and printers (of course); and a comfy swivel chair that has seen better days. And two cats who are really not supposed to be in there, but they worm their way in with big soppy eyes and soft furry faces and type in my novels and leave hair absolutely everywhere.

BH: What is the best writing advice anyone has given you?

JW: Don’t give up. That would be from my long-suffering husband.

BH: Any words of advice to aspiring writers for keeping the hope alive? 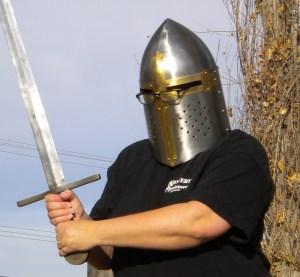 JW: Learn the business. Don’t be an amateur, be a professional and learn your craft, research the industry before you start to ask questions. Then network with other authors. Keep on writing and reading. As you finish one novel, start writing the next. Don’t wait around for the first one to sell before you start another. The first one may never sell. Mine didn’t. Write the best darn books you can. Take the advice of professionals. Don’t dismiss it just because you don’t want to hear it. And don’t self publish just because you can’t place that one darling manuscript. Maybe there’s a reason for its being rejected over and over. Write the next book, and the next. Hone your craft.

Thank you, Jeri, for telling us about your books, sharing your insights about the writing life, and bringing us one step closer to Wes, your Crispin cover model.

For first chapters of Jeri’s novels, book discussion guides, and her fabulous series book trailer, go to her website at www.JeriWesterson.com.

Click the titles to view each book on Amazon.com:

The Demon’s Parchment (third in the series)

Serpent in the Thorns (second in the series)

Veil of Lies (first in the series)