I don’t know what moron installed our shower. This is a good thing, because if I knew who that person was, I would make that person scrub the shower.

But this shower? This shower is stupid.

Now, I normally would not have such crude graphics, but at least this beats photographs of the real thing (ewww). Plus, our computer crashed (every precious word I ever typed on it was backed up, so no worries other than the $300 bill for fixing it). I’m at this moment using an ancient lap top that doesn’t have an SD drive ?! and don’t have a scanner hooked up to it either. So bear with me.

The Stupid Shower Viewed From the Side

This little dip between the shower floor and the drain reminds me of a moat dividing a castle from surrounding lands. But because the water just sits there, we end up with lots of yuckiness:

Like a moat, there could be dragons in it. (Wait, do moats have dragons? Or monsters? Or something else entirely?) 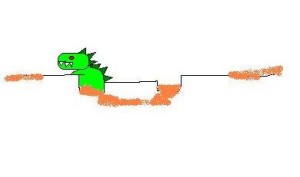 So periodically (not once a week, mind you) I have to go into the bathroom armed with a rag, scrub brush, and Scrub Free, which is the cleaner that came with the house, and smells sort of like a combination of car exhaust and moat-dwelling dragon farts.

And when I’m done scrubbing, the shower looks pretty much the same.

Also, our house seems to be collapsing around our heads, and we’re feeling very discouraged. I would catalog our recent misfortunes, but I’ve used up my hourly allotment of complaints. Until next time.

Oh, and I actually am kinda proud of my Paint graphics. They’re not up to  Hyperbole & a Half standards, but I like them so be gentle.