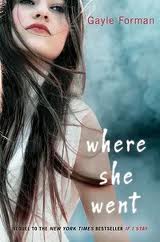 The set-up: Adam’s got his rock star career, celebrity girlfriend, a world of fans – everything he ever dreamed of…except Mia.

Main character’s goals: Although Adam’s ultimate goal would be to have Mia back, what he seems to be reaching for is closure, because he doesn’t believe it’s possible to get back together with Mia. Also, his goals have a lot to do with avoiding the other members of his band, with whom he used to be very close and now, not so much.

My reaction: Okay, I’m going to take off my nice gloves here, and say that I really would have preferred the story from Mia’s point of view. I fell in love with her in If I Stay, and was less than thrilled to start reading Adam’s voice all of a sudden (I try not to read the blurbs before I start a book). However, if the book were told from Mia’s point of view, it would no longer be Adam’s story, it would be hers, and it wouldn’t be the same story at all.

I will say, for what the story is (i.e. Adam’s, not Mia’s), it was done well, with all the emotional resonance and rockstar anguish you could hope for.

Of interest to writers: Is everyone else disappointed when a sequel is told from a new perspective? I can think of a few where I was disappointed. Are you ever tempted to write a sequel from a different character’s POV? Although I’m not ready to draft the sequel to my current work-in-progress, I’m thinking about it, and one side character in particular is shouting that she wants a starring role.

Reminds me of: Jane by April Lindner