I feel like such a cheater, making Lord of the Rings references when I haven’t even read the books. But I’ve totally watched the movies – the extended versions, even! – multiple times. So that sort of counts, right? (Even though I fast-forward through the Frodo scenes?) (Sorry, but he’s such a whiner he makes Z look good.)

My pal Kristen…wait, my fabulous pal Kristen gave us her video baby monitor. The first night we used it I hated the thing, because Maverick kept spinning around and we’d have to go in there and flip him over, and I was trying to watch a movie, damnit. But now he doesn’t spin quite as much, because he’s in his funny sleep sack thing. Whoops, he’s on his tummy now….

I straightened that out.

Also, I investigated the advice online (stick them on their backs to start, then shrug your shoulders because if they’re going to turn, you can’t stop them…without Velcro or no-longer-recommended stay-put devices). I also Googled “life monitors for sleeping babies,” not sure if they actually exist. They do. They’re expensive. Besides which, I’d probably buy one, and then I’d be trusting it to work instead of doing my job as a parent and checking on my kid. 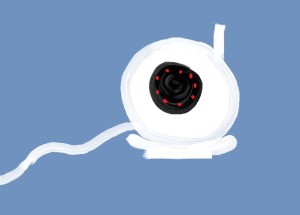 The Eye of Sauron looks like this. I’m not joking.

So one time I was watching him flail and fuss through the Eye of Sauron, and all of a sudden he levitated. “Whoa!” I said to my friend BDawg. “Maverick just levitated! Now he’s disappeared!”

I wish I could stop there, because it’s so X-Men, having a baby who levitates before vanishing. But what really happened was Homes went in and picked him up to comfort him. I, of course, had been content to watch him suffer, like the independence-promoting mommy that I am. Besides, it makes me hurt to see him hurt, so our mutual hurting was, in some twisted way, acceptable to me.

Besides, I was talking on the phone with BDawg and we didn’t have much time because her three-month-old was busy creating the kind of diaper blowout that makes legends.

Not to get competitive or anything, but my kid was levitating. Ish.

Yeah, he totally looks like he’s flipping me off.