Our NiFtY Author today is Holli Castillo, a writer and attorney who is the author of the Crescent City Mystery series. Californians take note: this is NOT the Crescent City up by the Oregon border, as I’d originally thought. Crescent City is also a nickname for New Orleans. Maybe everyone knows this except for me…but now I know, too. So there. Let’s move past my geographical ignorance and meet Holli Castillo! Not only has she created a great main character for her series, but she also has an inspiring publishing story to tell.

HC:  Jambalaya Justice is the follow up to Gumbo Justice, and once again follows New Orleans female prosecutor Ryan Murphy, this time as she involves herself in the investigation of a murdered hooker, Cherry.  Ryan has her own reasons for wanting Cherry’s murderer caught, and pushes the NOPD detective assigned to the case to solve the case.  When Cherry’s murder links to the unsolved murders of several other hookers, Ryan’s pursuit of the killer’s identity puts her in danger, especially since she’s hiding her involvement from her recently acquired homicide detective boyfriend, Shep.  On top of her extracurricular activities, Ryan also has her Strike Force cases to juggle, including the prosecution of a mobster murderer, a nasty domestic violence case, and the armed robbery of Big Who’s strip club.  And then there’s the home invader who’s off of probation and might be after her.  Just another typical week at the office for Ryan Murphy.  Set against the backdrop of pre-Katrina New Orleans, Jambalaya Justice is the second in Crescent City Mystery Series, which eventually follows Ryan through Hurricane Katrina and into the strange new world of post-Katrina New Orleans.  Jambalaya Justice will be available by this summer, 2011. 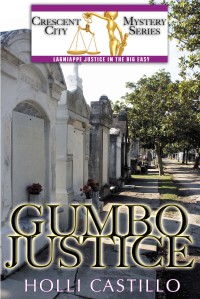 BH: The main character, Ryan Murphy, has a voice that definitely grabs me from the first chapter of Gumbo Justice (here’s a link for Chapter One): She’s sarcastic, intelligent, and at the same time, a little vulnerable. How did you go about creating her?

HC:  The sarcasm was the easy part, as I’m pretty sarcastic myself.  The intelligence I think is more knowledge based—she knows a lot about the law and she is definitely one of those over achievers that drove me crazy in school, so that element of her personality was easy to incorporate. The most difficult thing was probably making her vulnerable.  I’m the type of person who will let you know when you’ve done something to annoy me, but you’ll rarely hear me say anything about emotional things.  People attribute it to my German genes.  In any event, that was the most difficult part for me, trying to make Ryan so opposite from me as far as revealing her emotions.  I wanted to make her likeable, despite her flaws, so I had to look for opportunities where Ryan could show her natural vulnerability without making it too soap opera-ish. I spent a lot of time editing that part of her, trying to strike the right combination.

BH: How does your work as an attorney influence your writing?

HC:  My writing is based upon what I know, which is criminal law.  My cases give me constant inspiration for storylines and characters.  The legal aspect of Ryan’s job is easiest to write, because I still deal with the law and criminal procedure on pretty much a daily basis.  I had other jobs before I was a lawyer, and those also helped me build a foundation for some of the scenes in my novel.  I was a child support collector, a theater stage manager, bartender, waitress, and I worked my way through undergrad at a Can-Can show on Bourbon Street, all interesting jobs to have in New Orleans.  All of my past job experience will eventually find a home in one of the Crescent City Mysteries.

BH: Tell us a little about your path to publication.

HC: Mine was a tortured path, and if nothing else it should give anyone about to give up hope that they may get published.  After I finished the novel, I queried agents.  I had bought books on how to write a query letter, worked on it until I thought it was perfect, and bought the Novel and Short Story Writer’s Market for that year, did what I thought was sufficient research, and sent out the queries.

No big surprise, I received a bunch of rejections.  Some were form rejections, but other had little notes on them.  I didn’t take this a positive sign, which I should have.  Handwritten notations mean some human being actually read my work and thought enough to explain to me why his or her company couldn’t offer me representation.  After what I thought was enough rejections, I signed up for an online novel writing course at Writer’s Digest.  Miki Hayden was my online instructor, and she gave me the best advice I have ever received.  The first thing she said, when I submitted my query, was that my manuscript of 160,000 was too long, and that most agents looking at my query letter wouldn’t read past that number.  I didn’t know an acceptable length of a novel from an unknown author.   I calculated the page numbers according to famous writers’ books, like Grisham, John Sandford, Tami Hoag, etc.  Of all of the books I had bought about querying and writing, not one of them said aim for 80,000 words.

Miki Hayden also offered some substantive advice, a few key things that I think made a huge difference.  I then edited, cut, brought the manuscript down to 85,000 words, and then re-read my rejections.  I noticed some said things like serial killers were not for them, or had underlined the word serial killers.  Some said the material was too dark for the publishers they worked with.  That made me realize I hadn’t done enough research in determining which agents were the most appropriate to submit my work to.  I had one agent, a pretty famous one who writes books on finding an agent, comment that my dialogue wasn’t believable.  That kind of stung, but I took it constructively and weeded through my dialogue to make it the best I possibly could.

Before I queried again, I did a more targeted search, this time looking at publishers.  I felt like I was at a disadvantage, because I had

already sent my work out to the agents I thought were most likely to represent me, but it was too late to revisit that.  Before I queried, I bought a book from the publishing houses I was going to query, to see what type of stuff they actually published.  I queried a few more agents as well, and had a hit off an agent who said she was really interested.  I sent her the manuscript and waited, and before I heard back from her, Katrina hit, we evacuated, and for the next months I was too busy dealing with this new world I lived in to worry about Gumbo Justice.  That agent finally wrote to me and said she was not taking any new clients because of health issues.  I considered self-publishing, but had already decided if I ever went that route I would have to hire an editor, because I didn’t want to put my work out there without a professional weeding through it.  I wasn’t quite ready for that, and not long after that a publisher contacted via email off of a query I had previously submitted, and asked to read the novel.  We subsequently signed a contract, and right as we were discussing the best time to release my novel, summer of 2008, I was in a head-on collision with a drunk driver and was in a wheelchair for seven months, full of hardware, having surgeries, and eventually had to learn to walk again.  The whole thing put the publication date back, but one day short of a year from the accident, Gumbo Jumbo was released.  If that doesn’t give someone out there hope, nothing will.

BH: Wow, that’s amazing. What does your workspace look like?

Rin and Deaf Kitty - Holli doesn't talk about them in the interview, but they're cute enough to warrant a photo slot!

HC:  My workspace is my laptop.  I can work from anywhere, wherever and whenever I feel like it.  At home, I work on the living room coffee table, a desk in my office, my bed, my kitchen table, or the bar.  All I need is my computer, and since my last laptop crashed during the 2010 Superbowl (when my hometown Saints won), it has a flash drive next to it all times, so I can save my work each and every time I work on it.  My brother in law is a computer guy for FEMA, and although he was able to save all my work, it put me behind schedule with Jambalaya Justice.

HC: I tend to focus more on grammar and punctuation type books such as Eats, Shoots and Leaves, but I do like The First Five Pages by Noah Lukeman  and How Not to Write  A Novel by Mittelmark and Newman.  My favorite book on writing, though, is a screenplay writing book, Your Screenplay Sucks, 100 Ways to Make It Great by William Akers.

BH: Any words on advice to aspiring writers for keeping the hope alive?

HC: When it’s not working out for you, whether in the writing stage or when trying to find an agent or publisher, take a big step back and remove yourself from the picture. Look at the problem objectively, analyze the situation like a doctor approaches a patient to diagnose an illness, and figure out what the problem is and how you can best solve it.  If I hadn’t decided to take the online writing course, I don’t think I would be published today.  Even just learning that my manuscript was almost twice as long as it should be made such an enormous difference.

BH: Thanks for sharing your insights into the writing life with us, Holli! Hearing about your trials getting published does give me hope! For more information on Holli Castillo and her books, please visit the links below: