For some reason (I suspect bad karma from letting too many tomatoes go bad in the fridge last summer), my winter garden has not…well, it hasn’t anything. It looks like a few scrawny seedlings propped up in the ground, even though I sowed the seeds in November. After talking with a few other gardener friends (amateur and seasoned alike), I still have no clue what I did wrong, although I suspect I planted those seeds too late. It was hard to decide, though! Even October felt like summer on some days, and the seed packets were very clear: plant seeds when the soil is no longer warm.

Which takes me to a tangential rant, because sometimes those instructions say, “Plant 3 to 4 weeks before last frost…” What am I, a fortune teller? Should I dig up my old Magic 8 Ball? I don’t know when the last frost will be.  I live in central California – maybe our last frost was five weeks ago! Should I have been planting these suckers in December? (I just used this online Magic 8 Ball and asked it, “When is the last frost?” and it said, “Most likely.” Enough said. Really.)

But back to my main story: my lettuces wouldn’t even feed a slug, they’re so pathetically small. When I planted them, I was ever so careful to use the seed starter soil, then place the seeds an exact eighth of an inch from the surface, covering them lightly, after which I gently sprayed them with water from a spray bottle. Thinking Z would enjoy getting in on a little gardening action, I told her a large pot was hers to use. I gave her some seeds, told her to go to town. Okay, fine, I hovered, made sure she didn’t put them all in one spot, and I controlled the watering lest she water only herself (and this in November, when it was cold. Cold-ish).

I think this pictorial comparison really says it all, and I could have dispensed with the longwinded commentary and given you this: 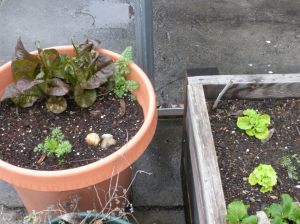 Z’s lettuces on left…my pitiful lettuces on the right. You might need to magnify this picture to actually see mine.